You are here: Home / News / Timeline of Gold Discovery to the Krugerrand

Shortly after the discovery of gold in Johannesburg, President Kruger decides the country needs to start producing its own coins. In 1890, a concession is granted by the Volksraad of the Zuid Afrikaansche Republiek (ZAR) to establish the National Bank, which includes permission to operate a State Mint. 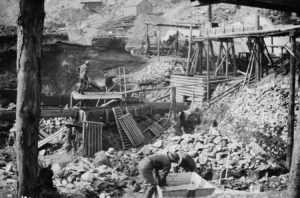 1892 The First Mint in South Africa

The State Mint opens on July 6 1892, on Church Square in Pretoria. However, it is doomed to be a short-lived existence. After the Second Anglo-Boer War, British currency becomes legal tender in the Transvaal and Orange Free State, and the Mint is closed in 1900. 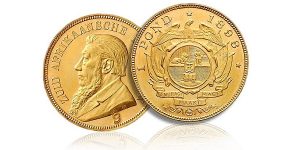 When the British forces occupied Pretoria in 1900, the Mint was closed. The Boers used the one Pound gold blanks that were in storage for payment of State expenditure. They were named “naked pounds”. An attempt was made to establish a mint at an abandoned gold mine near Pilgrim’s Rest. Soft hand-cut dies and an improvised fly press were used to strike Pound pieces of practically pure gold to the intrinsic value of 22 shillings. The “veldponde” (field pounds) were exchanged with the burger for their British sovereigns. This facilitated trading with the local residents who would only accept the “coin with the horse on it”. With a single set of dies, 986 coins were minted after many trials. Ironically, striking was actually completed a few days after the Boers had conceded victory to the British forces. The “Veldpond” is amongst the most precious historical treasures a collector can hope to possess and there have been many known forgeries. 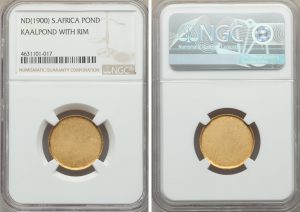 1910 British currency is the accepted legal tender in the whole country when the four provinces become the Union of South Africa.

In the years following the Second Anglo-Boer War, no coins are struck in South Africa and all money is imported from the United Kingdom (UK). The Pretoria Mint Act of 1919 provides for the establishment of a branch of the Royal Mint in Pretoria. Here, gold sovereigns identical to those coined in London will be produced, with just a small South African mint mark to distinguish them.

The Royal Mint Pretoria is established when Prince Arthur of Connaught strikes the ﬁrst gold Pound on 3 October 1923. In its ﬁrst two years of existence (1923 and 1924), the Mint produces only a handful of sovereigns. Today, these coins are rare, and have become expensive collectors’ items. In 1925, the Mint revs up its production, and at its peak in 1928 it strikes a record of over 18 million sovereigns. 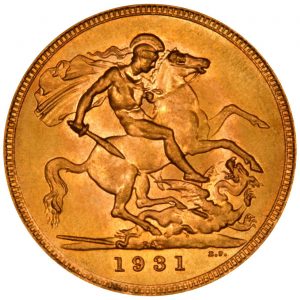 1961 South Africa Gets its Own Currency

South Africa becomes a Republic in 1961, and with this, the country finally gains its own official currency – the Rand. The new decimal currency debuts at R2 to the British Pound and all the coins are produced by the South African Mint. To help South Africans get used to the drastic switch, price tags are initially marked ‘old’ and ‘new’ style, while the old currency is slowly withdrawn. An extensive publicity campaign is organised to prepare people for the money changeover. Part of the campaign is the immensely popular jingle, ‘Decimal Dan’, which fast becomes a familiar tune on household radios, blaring out its message to a catchy rock ‘n’ roll beat. South Africa sets a great example with its transition to a decimal system, which takes place years before the British transition, and is executed smoothly and successfully. 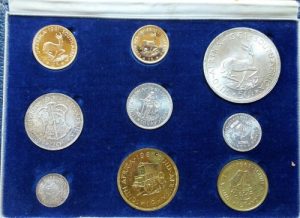 The South African Mint is world-renowned for having struck the world’s first bullion coin on 3 July 1967. It has been so successful that by 2016, 130 years after the discovery of gold in South Africa, the Mint has produced more than 60 million Krugerrands of all sizes.

*Did you know that seven years after being elected, Kruger was forced out by British troops, and he fled to Europe. But his contributions to South African independence were never forgotten. In a fitting tribute to the past president, South Africa issued the Krugerrand, a one-ounce gold coin featuring a portrait of Paul Kruger on the obverse side, and one of the national symbols—the springbok—on the reverse side. 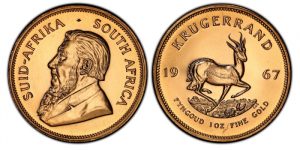 “Wheelbarrow” Patterson got his nickname because he carried all of his belongings in a wheelbarrow. He worked for the gold-mining outfit MacMac Diggings as a gold miner, or digger, as they were commonly called. The antisocial “Wheelbarrow” wandered off to dig for gold in a secluded part of what was known as Pilgrim’s Creek. The story goes that he found the first large gold deposit, but instead of notifying anyone, the loner just kept on panning. Soon enough, another miner found gold in the same stream. Except this miner, William Trafford, registered his claim with the gold commissioner at MacMac Diggings, thus triggering a massive gold rush, which changed the face of the region forever.

But the history of the gold coinage in South Africa didn’t begin with the branch mint at Pretoria. It was with the discovery of large deposits of gold in South Africa, known as the Witwatersrand gold Rush, in 1885 that the country would change forever from an agricultural economy to a world leader in gold production and the richest and most prosperous country in Africa. 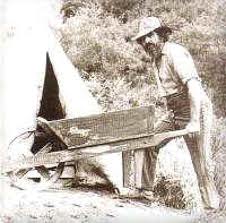 1970 Economic sanctions against South Africa made the Krugerrand an illegal import in many Western countries during the 1970s and 1980s. 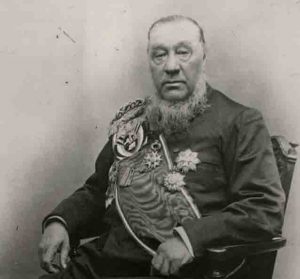 Krugerrand, Eagle, Maple as well as bars to name a few.