You are here: Home / Archives for luxury bags 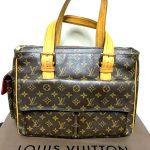 Interesting Facts about Louis Vuitton The brand’s iconic monogram logo print and stylish handbags are timeless and there’s no monogram easier to recognise than Louis Vuitton. But did you know that Louis Vuitton changed the way luggage was made? Here are a few interesting facts about Louis Vuitton: Louis Vuitton opened his first store in 1854, he began making handbags after the 1892 world’s fair. All Louis Vuitton handbags are handmade. It takes about a week to create one handbag. The brand was also well known for developing a lock that ‘no one could pick’ for their trunks. In 1896, George Vuitton (Louis Vuitton’s son), patented the single lock system with two spring buckles. George was so confident with the quality of the locks that he publicly challenged famed escape … END_OF_DOCUMENT_TOKEN_TO_BE_REPLACED