You are here: Home / Archives for Gold 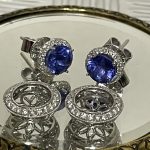 Here we will take an in-depth look at white gold, it’s pros and cons – and gives you buying tips for when you’re buying jewellery. What is white gold? White gold is an alloy of gold. This means that it is made up of pure yellow gold, mixed with alloy metals that have a silvery-white color, such as palladium and silver. Why is it mixed with alloy metals? In all gold jewelry, pure gold has to be mixed with harder metals for added durability and strength. This is because on its own, pure gold is a very soft metal. Without the harder alloy metals keeping it rigid, pure gold would easily bend out of shape – and that’s no good in jewelry. This is the case whether the jewelry is made from yellow gold, rose gold or white gold, because in any of these variations, gold on its own … END_OF_DOCUMENT_TOKEN_TO_BE_REPLACED 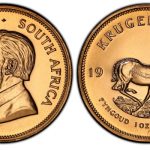 1886 Gold is Discovered Shortly after the discovery of gold in Johannesburg, President Kruger decides the country needs to start producing its own coins. In 1890, a concession is granted by the Volksraad of the Zuid Afrikaansche Republiek (ZAR) to establish the National Bank, which includes permission to operate a State Mint. 1892 The First Mint in South Africa The State Mint opens on July 6 1892, on Church Square in Pretoria. However, it is doomed to be a short-lived existence. After the Second Anglo-Boer War, British currency becomes legal tender in the Transvaal and Orange Free State, and the Mint is closed in 1900.  1902 “Staatsmunt te Velde” When the British forces occupied Pretoria in 1900, the Mint was closed. The Boers used the one Pound gold blanks that were … END_OF_DOCUMENT_TOKEN_TO_BE_REPLACED