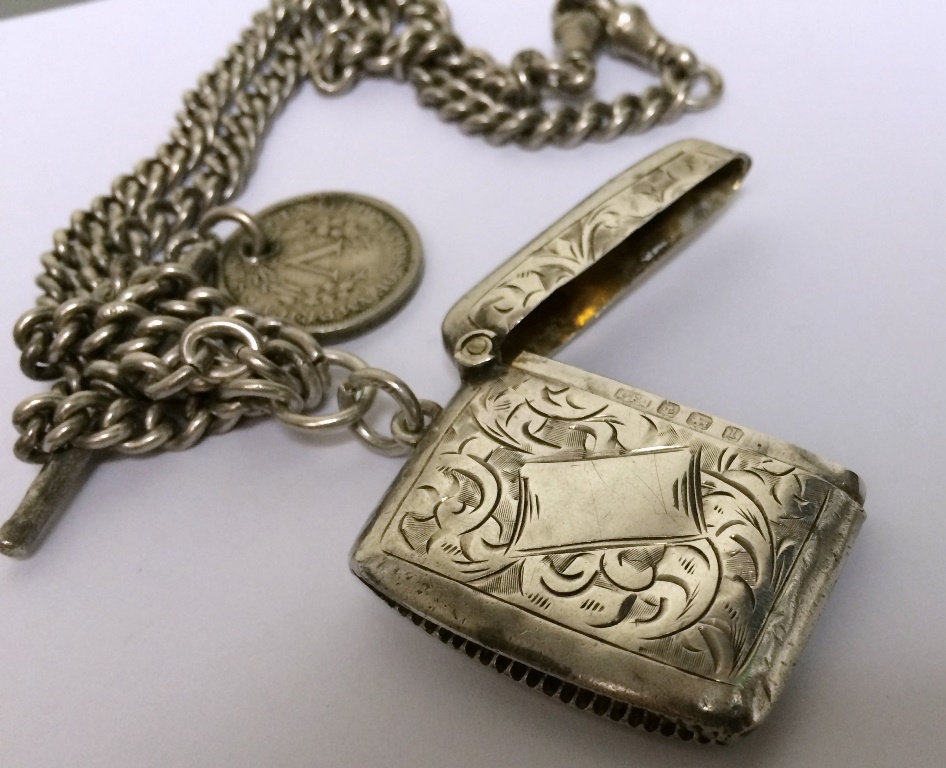 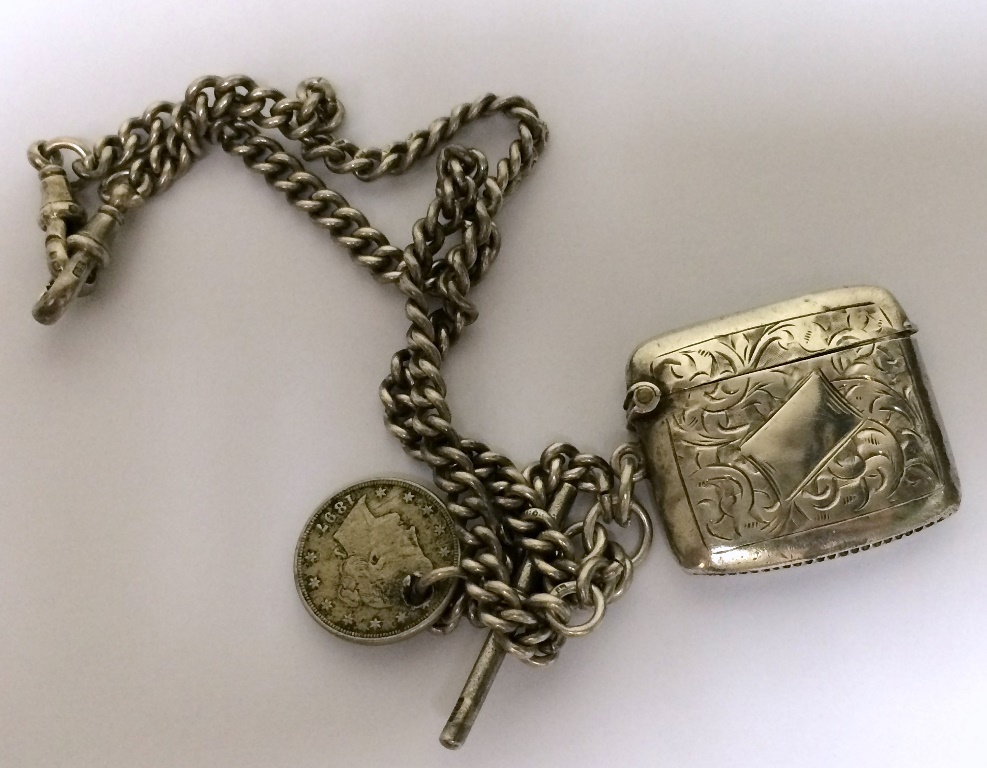 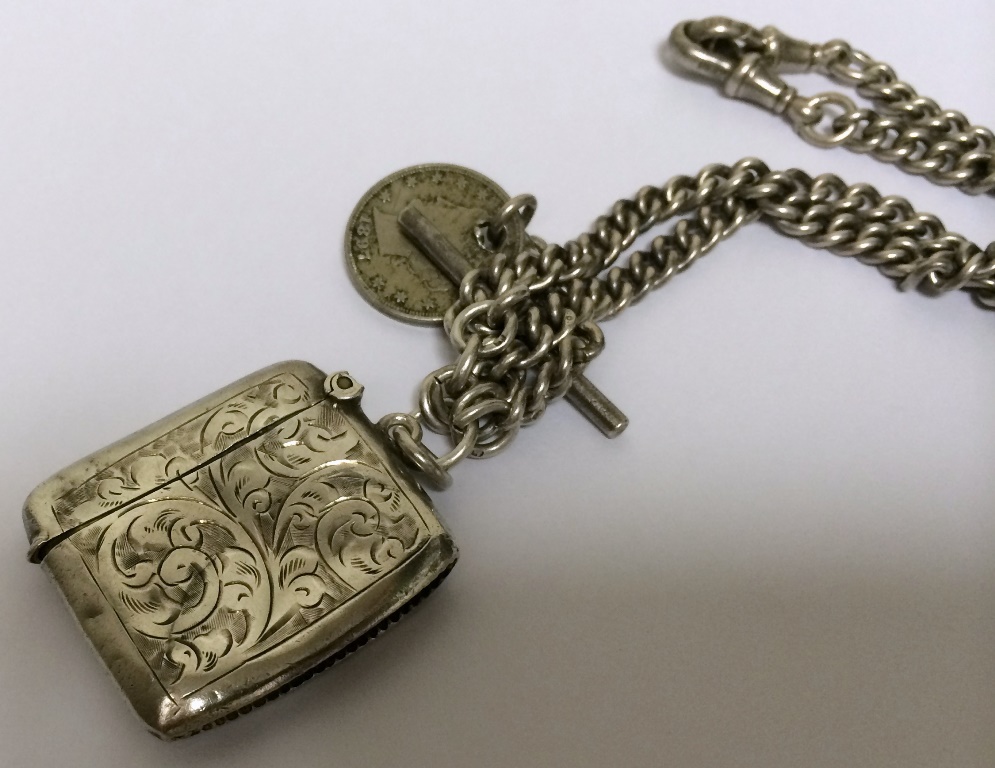 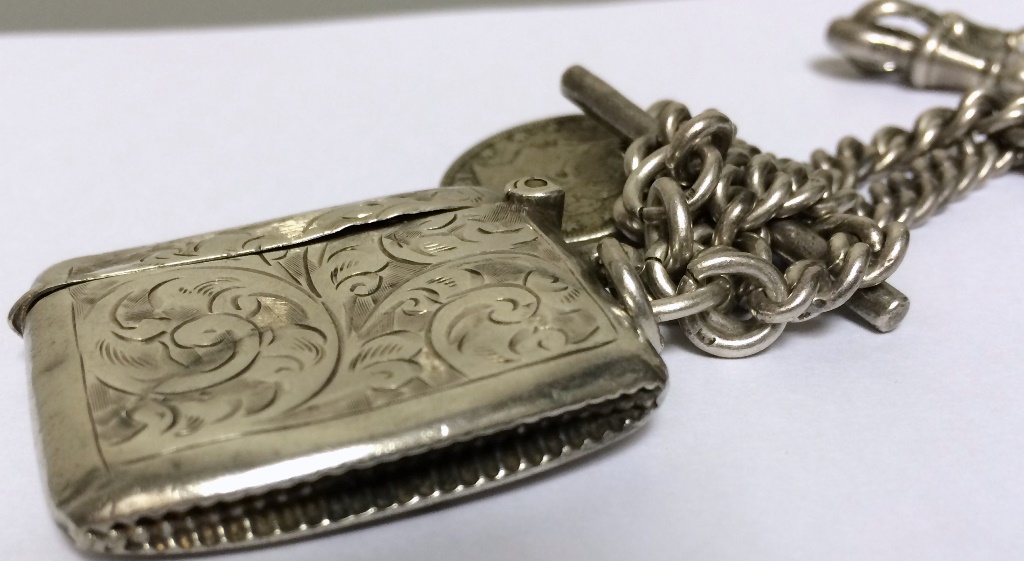 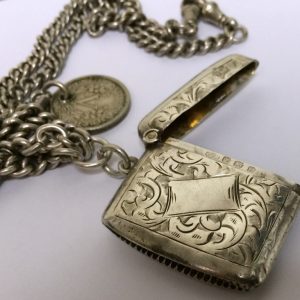 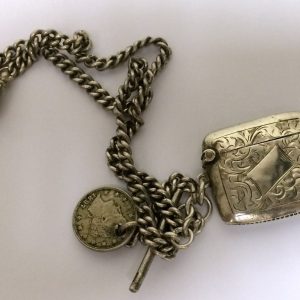 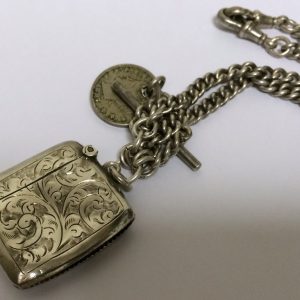 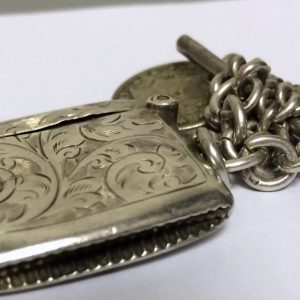 R1800.00
Vacant Cartouche
A ribbed bottom acts as a simple surface to light a match on.
Sterling Silver chain attached

The Vesta is in good condition with the lid correctly aligned and opening and shutting correctly. There are some signs of use – some small dings on the case and lid as well as some fine surface wear.

Vesta cases, vesta boxes, or pocket match safes or matchsafes were small portable boxes made in a great variety of forms with snapshut covers to contain vestas (short matches) and keep them dry.

So called after the name of one of the early makers (which was taken from the goddess Vesta, a Roman deity of fire and the hearth), they came into use around the 1830s and were produced extensively between 1890 and 1920. During this period, almost everyone carried strike anywhere matches, so they could light stoves, lanterns and other devices. Early matches were unreliable and prone to ignite from rubbing on one another or spontaneously. Accordingly, most people carried a match safe to house their matches. Wealthy people had match safes made of gold or silver, while common folk had ones made of tin or brass.

They were made throughout the world including the United Kingdom, in the USA, continental Europe and Australia. Significant English makers of vesta cases included notable silversmiths such as Sampson Mordan and Asprey & Co. Significant American manufacturers of match safes include Wm. B. Kerr, Gorham, Unger Brothers, Battin, Blackington, Whiting[disambiguation needed], George Scheibler and Shreve & Co.

The different patterns and types must run into many thousands. As well as plain and decorated square, oblong and round cases, a myriad of novelty shapes have been recorded; silver, brass or white metal pigs with hinged heads were popular, as were vesta cases in the form of Mr Punch, hearts, skulls, musical instruments (often violas), owls, boots and shoes, bottles, ladies’ legs and so on.

They were also made in a wide range of materials, including pressed brass, pressed tin, gunmetal, nickel silver, gold, bone, ivory, wood of varying types, early plastics like tortoiseshell and bakelite, and ceramics. The more unusual materials included leather and the sea bean seed from Entada gigas commonly known as the monkey-ladder, sea bean, Cœur de la Mer or Sea Heart. Although the majority were made of inexpensive materials, some were made of precious metals or enameled. These precious metal cases typically had a gold wash interior to prevent corrosion by the chemically active match heads.

A distinguishing characteristic of match safes is that they have a ribbed surface, usually on the bottom, for lighting the matches. Some match safes incorporated a cigar cutter or a small knife blade as well. Often made to be carried in the pocket, some were small enough to be suspended from a fob chain or an Albert chain. Others were made to be left in a handy position in the home, such as the kitchen or close to a fireplace. These were usually larger than the pocket vestas, and were sometimes referred to as standing or table vestas. Pocket vestas and sovereign cases were sometimes combined into the one item.

Promotional vestas were sometimes produced by different companies, e.g. champagne producers. The Gillette company produced a brass razor blade case with a ribbed bottom that could be used as a vesta case after the razor blades had been used.

Occasionally a vesta case was made to double as a go-to-bed matchbox.

Vesta cases are still to be found in a vast array of shapes, sizes and materials, and many are extremely attractive.