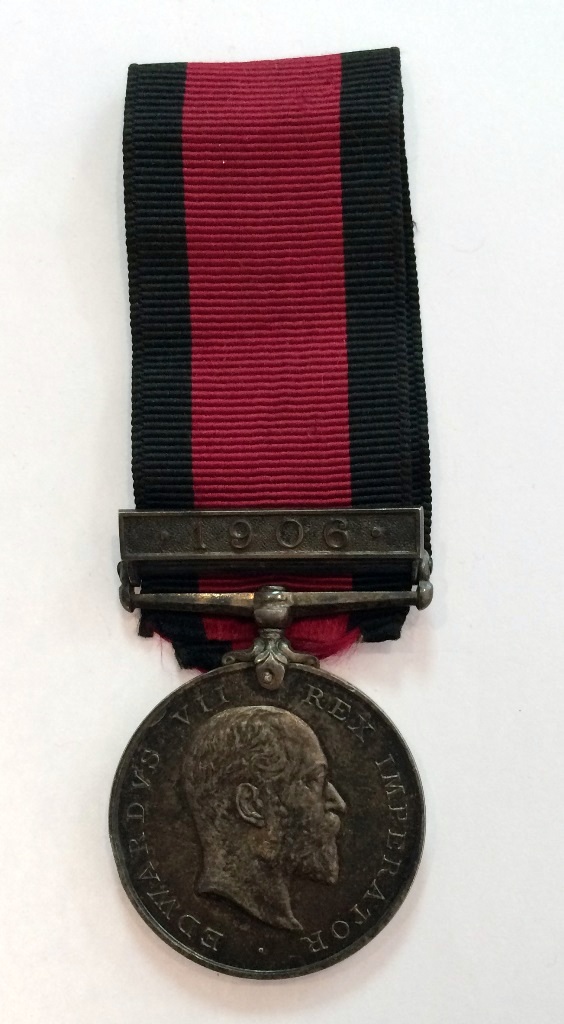 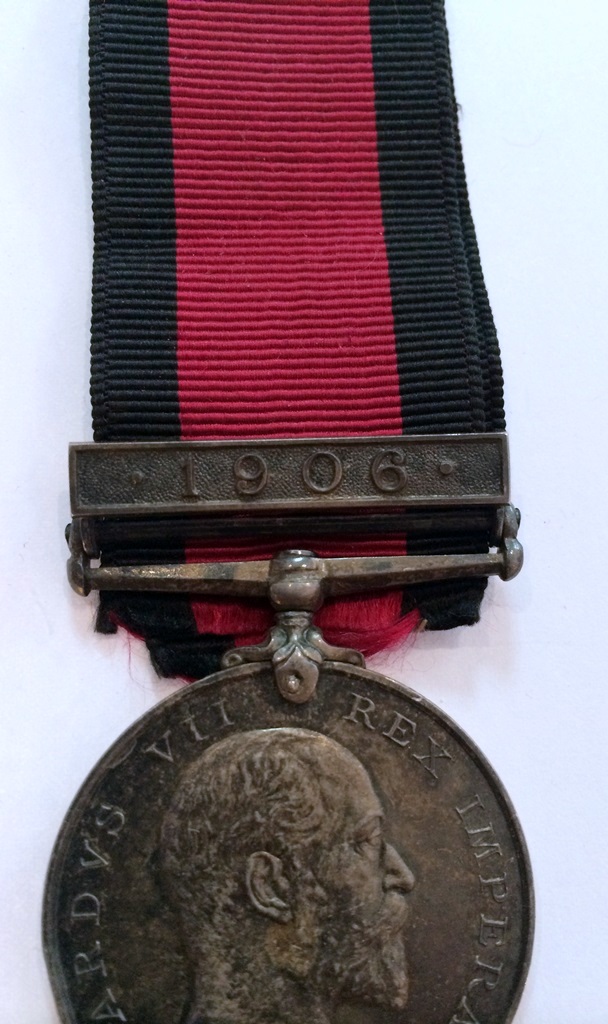 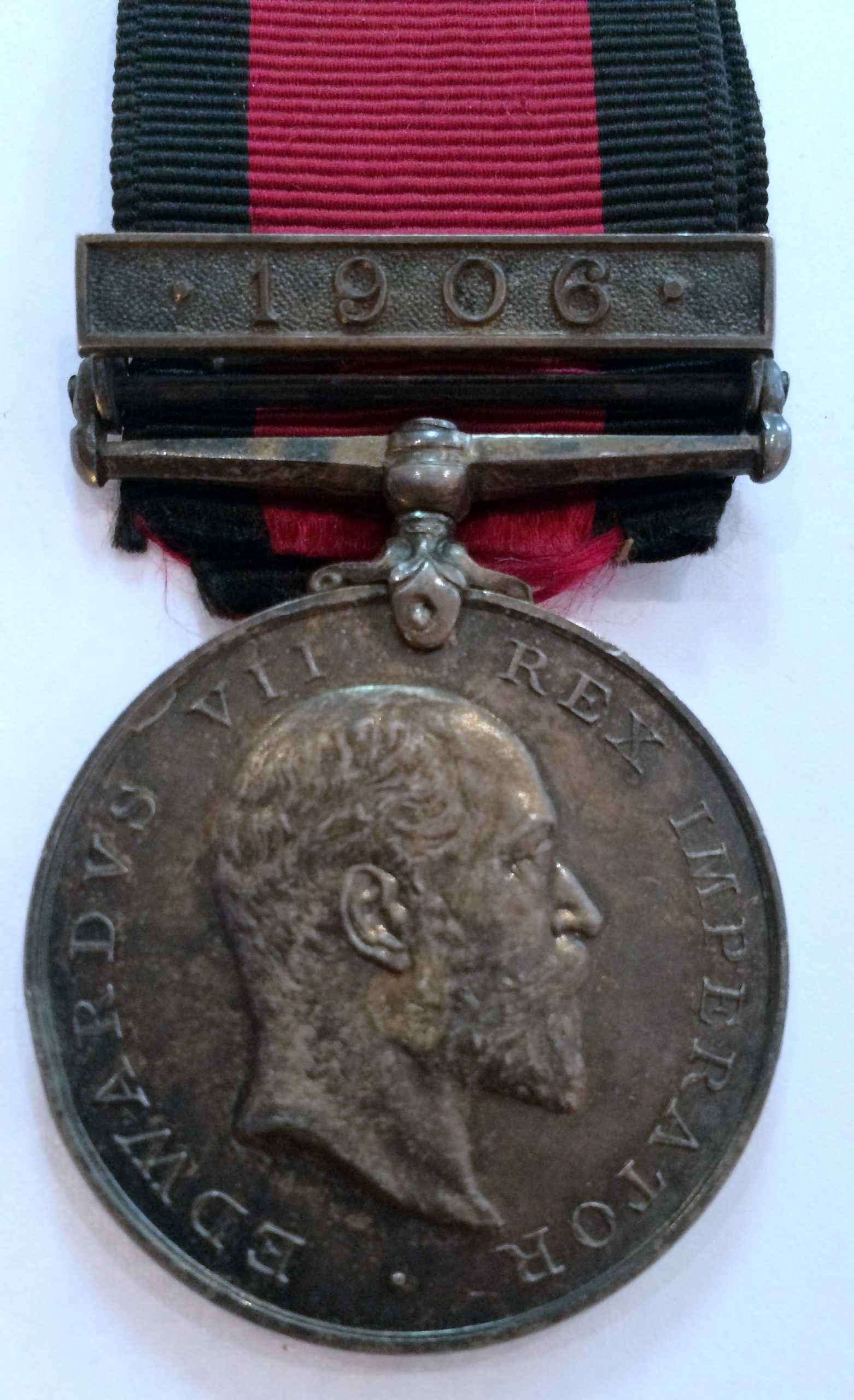 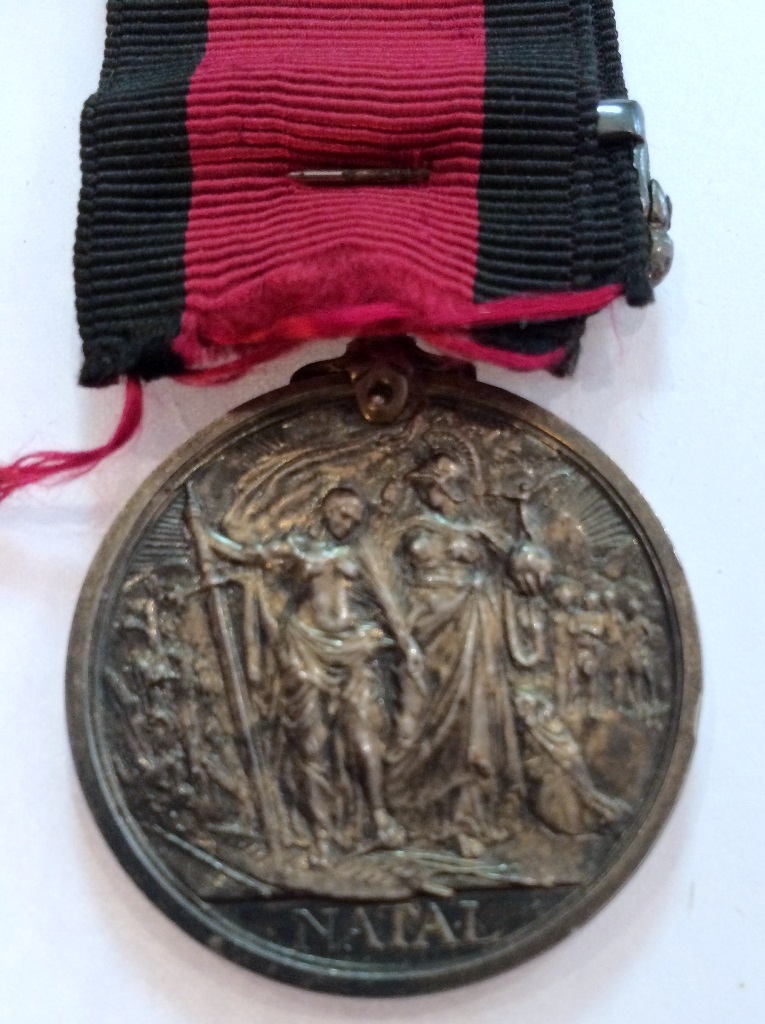 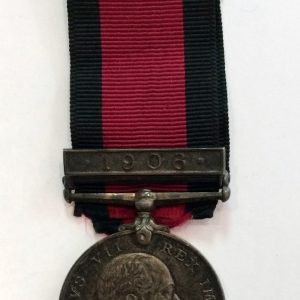 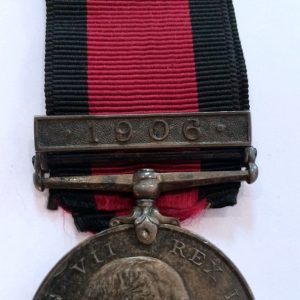 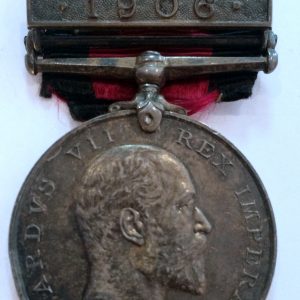 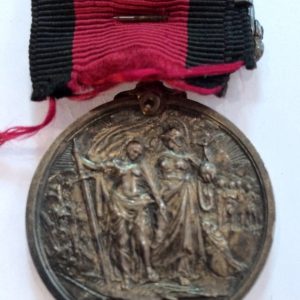 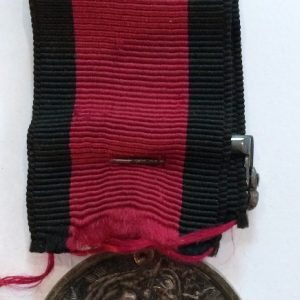 ___________________________________________________________________________________
ABOUT THE MEDAL
This is the only British campaign medal not awarded to any British troops.
The Natal Native Rebellion Medal was a South African campaign medal. It was authorised on 9 May 1907, for service in the Bambatha Rebellion in Natal in 1906.
In order to qualify for the medal, a soldier or policemen must have served in the field for at least twenty days between 11 February 1906 and 3 August 1906. Those who served for fifty days or longer qualified for a clasp with the medal.
The medal is silver. The obverse depicts the uncrowned head of King Edward VII, surrounded by his name, style, and titles. The reverse displays the figures of Britannia and Natalia, against a background of a landscape with Zulu huts. The word “Natal” appears in the exergue. The ribbon is crimson, with black edges. The clasp displays the date “1906”.
A total of 9,622 medals were awarded. Most of the recipients were members of the Natal colonial military and police forces, but 546 were issued to volunteers from the Transvaal and 70 to troops from the Cape Colony.

THE HISTORY
The Bambatha Uprising was a Zulu revolt against British rule and taxation in Natal, South Africa, in 1906.
The revolt was led by Bambatha kaMancinza (ca. 1860-1906), leader of the amaZondi clan of the Zulu people, who lived in the Mpanza Valley, a district near Greytown, KwaZulu-Natal.
In the years following the Anglo-Boer War white employers in Natal had difficulty recruiting black farm workers because of increased competition from the gold mines of the Witwatersrand.
The colonial authorities introduced a £1 poll tax in addition to the existing hut tax to encourage black men to enter the labour market.
Bambatha, who ruled about 5,500 people living in about 1,100 households, was one of the chiefs who resisted the introduction and collection of the new tax.
The government of Natal sent police officers to collect the tax from recalcitrant districts, and in February 1906 two white officers were killed near Richmond, KwaZulu-Natal. In the resulting introduction of martial law, Bambatha fled north to consult King Dinizulu, who gave tacit support to Bambatha and invited him and his family to stay at the royal homestead.

Bambatha returned to the Mpanza Valley to discover that the Natal government had deposed him as chief. He gathered together a small force of supporters and began launching a series of guerrilla attacks, using the Nkandla forest as a base. Following a series of initial successes, colonial troops under the command of Colonel Duncan McKenzie set out on an expedition in late April 1906.
Once they succeeded in getting face to face with and surrounding the rebels at Mome Gorge, the British victory in the unequal battle was inevitable, given the vast disparity of forces. As the sun rose, colonial soldiers opened fire with machine guns and cannon, on rebels mostly armed only with traditional assegais (spears), knobkerries (fighting sticks) and cowhide shields.
Bambatha was killed and beheaded during the battle; however, many of his supporters believed that he was still alive, and his wife refused to go into mourning.
Bambatha’s main ally, the 95-year-old Zulu aristocrat Inkosi Sigananda Shezi of the amaCube clan (cousin and near-contemporary of the Zulu king Shaka) was captured by the colonial troops and died a few days later.
Between 3,000 and 4,000 Zulus were killed during the revolt (some of whom died fighting on the side of the Natal government).
More than 7,000 were imprisoned, and 4,000 flogged. King Dinizulu was arrested and sentenced to four years imprisonment for treason.
The war cost the Natal government GB£883,576 (equivalent to £370,000,000 in 2010).